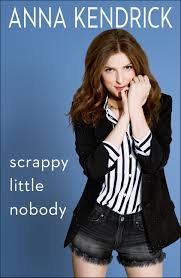 PLOT– In her memoir, Scrappy Little Nobody, actress Anna Kendrick follows her career from a child star on Broadway to breaking into Hollywood with hit movies, like Pitch Perfect and Into the Woods.

LIKE– Memoirs, especially light memoirs, are my go-to plane travel reading. I’m a fan of Anna Kendrick’s films and she’s a low-key celebrity, not one that is making tabloid headlines, so even though she’s only in her early thirties, I was curious to read about her career and personal life.

I had no idea that Kendrick was a former Broadway actress or that she had been nominated for both a Tony Award and Drama Desk Award for her role in High Society. I love musicals and the crazy thing is, if this had occurred in the mid 90’s, as opposed to the late 90’s, I would have known Kendrick from her theatre roles, rather than film. In high school, I was absolutely obsessed with all things theatre and I knew all about everything that was happening on Broadway. I still love theatre, but the obsession waned as other things, like college, got pushed to the forefront. Although, I do remember the production of High Society, the specifics like cast and awards, were not on my radar. I loved reading about her experience on Broadway. especially how her family supported her dreams, even though it meant a lot of sacrifice and wasn’t even financially rewarding. Also, that Kendrick had to sacrifice a normal childhood to chase her dreams and that hanging out with other Broadway kids, is a bizarre experience.

Her Broadway success didn’t automatically translate to film offers. She went the indy route, making a musical film called Camp, I’ve never heard of Camp, but apparently, it has a cult following and Kendrick is often approached by fans of the film. It went to Sundance: Kendrick recounts a crazy trip, where the kids of the film, mostly unknown talent, descended on the Utah ski town and went wild. A repeating theme of Scrappy Little Nobody, is the years of work ( or lean times of no work), that Kendrick had to put in, before she became well-known. Every time she seemed on the verge of having a breakthrough, it wouldn’t happen.

Twilight, where she had a small part as a non-vampire friend of Bella (Kristen Stewart) was a big budget film that gave her enough money to last through the lean times. Even Up in the Air, a critically acclaimed film in which she received an Oscar nomination, didn’t provide enough income or job offers to sustain her. Kendrick recalls her rather unglamorous trip to the Oscars and feeling pressured into buying expensive shoes just to give the appearance of living a rich and glamorous life-style. Until recently, Kendrick shared a small, no-frills apartment with roommates, even during her trip to the Academy Awards.

In Scrappy Little Nobody, Kendrick comes across as a very down-to-earth, funny, and slightly-awkward thirty-something. She shares advice from George Clooney, who cautioned her not to count on fame or fortune in the film industry. Although Clooney is arguably a mega-star, it’s easy to remember that so many actors do have fleeting careers, or they may luck out with steady work, but not obtain the level of fame or money, that the public imagines.

DISLIKE– Nothing. Scrappy Little Nobody is entertaining and inspirational.

RECOMMEND– Yes, if you’re a fan of Broadway or Kendrick. Scrappy Little Nobody is a good pick for people needing inspiration or for a young person looking to break into show business. Kendrick may still be young, but she has had some incredible opportunities and she gives common sense advice based on her rather normal life.