Thank You to St. Martin’s Press for providing me with an advance copy of Wendy Walker’s new novel, Emma in the Night, in exchange for an honest review.

PLOT– Cass Tanner has returned to her mother’s home after mysteriously disappearing three years earlier. Her sister, Emma, is still missing and Cass tells a story of a couple that are keeping Emma and Emma’s toddler, captive on a remote island. Abby Winter, the forensic psychologist  has long suspected the girl’s narcissistic mother is involved, but she doesn’t have proof. The more Abby hears Cass’ story, the closer she gets to finding out the truth.

LIKE– I have not read Wendy Walker’s previous novel, but based on the buzz and the description of Emma in the Night, I had high expectations.

I liked the contrast in settings. Cass and Emma come from a privileged background, spending summers in Europe and weekends at the country club. This juxtaposes with their captivity in the remote house on the island, where although they had their needs met (including ice cream and rented movies), they were still being kept captive. Emma in the Night features a variety of characters from different backgrounds, including a gruff fisherman from Alaska. I like how the worlds in the story collide, with a message of never to trust what is on the surface.

The suspense and mystery plot is solid. I did not anticipate the ending, although Walker perfectly sets it up.

DISLIKE- Unfortunately, much of the story fell flat. I finished Emma in the Night yesterday and I’ve spent the last day trying to pinpoint the disconnect. I think it has to do with the characters. I didn’t connect with any of them. The story bounces between Cass and Abby. The Cass chapters are told in first person and the Abby chapters are told in close-third. I’m not sure why this choice was made. Walker provides background information for Abby, making it clear why this case is personal for her and I wish that she had written the character in a way that made Abby personal to the reader. I think writing both characters in first person would have helped this issue.

Although the plot is solid, there is a lot of telling, rather than showing the events leading up to solving this cold-case. Much of the story is told through interviews with Cass and this device grew tedious. I think my main disconnect, wasn’t the story itself, but the way in which it was told. I wish we had been allowed a more personal look at the characters and that as a reader, I could come to my own conclusions, rather than having everything spelled out for me.

RECOMMEND– No. I truly didn’t enjoy Emma in the Night. However, I saw enough potential in Walker’s storytelling and I’ve heard fabulous things about her debut novel, All is Not Forgotten, that I plan on buying it. Walker warrants a second chance. 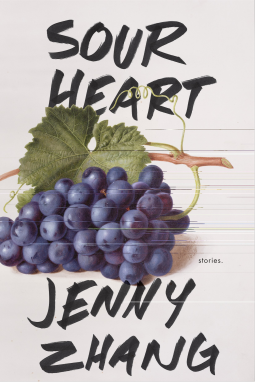 Thank You to Random House Publishing Group for providing me with an advance copy of Jenny Zhang’s Sour Heart: Stories, in exchange for an honest review.

PLOT – Jenny Zhang’s Sour Heart: Stories is a collection of connected stories following Chinese immigrants living in New York. There is a heavy emphasis on young, female characters, who are trying to understand both their new country and their parents, who lived through China’s cultural revolution.

LIKE- I grew up in a middle-class, culturally diverse neighborhood and many of my close friends are Chinese. Despite experiencing diversity in my life, I’ve realized that my reading selections are not as diverse as they could and should be. I’m grateful that Zhang’s Sour Heart: Stories found its way to my TBR Pile.

I was most interested in the parts that focused on the family relationships, specifically the differences between growing up during the Cultural Revolution and this new generation, that is growing up in America. There is a huge challenge with regard to communication between the generations. The challenge isn’t limited to the generations, it also comes with the different perspectives of the immigrants. Although they all arrive in America with little in way of possessions or money and they meet as strangers sharing a cramped apartment, each family does come from a different background and brings their unique perspective. Zhang’s stories are filled with a huge variety of character experiences.

My favorite story was the last chapter, one dealing with the title character who has been nicknamed Sour Heart for her love of sour foods. In the last story, she is an adult examining the relationship she has with her relatives, both her parents and relatives in China. It’s complicated and includes so many layers. How do you bond with blood when you live so far away and have had such differences in your life?

DISLIKE– As much as I admire Zhang’s storytelling, I have to admit that I felt a disconnect. I found the sections of the girls trying to fit in to their American schools, to be less engaging. Some of their behavior and frank sex talk didn’t ring true to my childhood experience and it was hard to connect.

RECOMMEND– Yes. Sour Heart: Stories was uneven for me, but I’d still recommend it. I’ve not been exposed to many other fictional stories on this subject and for diversity reasons, Sour Heart: Stories is a worthy read. When I was engaged in Zhang’s writing, she absolutely shined and I felt moved by her characters and prose. I look forward to discovering more of her writing.

Thank you to Scribner for providing me with an advance copy of Tom Perrotta’s novel, Mrs. Fletcher, in exchange for an honest review.

PLOT– With her only child off to college, divorced mom Eve Fletcher is finding herself at a transition. She is in her mid-forties and works as a director for a senior center, but she yearns for something more. To broaden her horizons, Eve signs up for a gender studies class at the local community college and befriends the professor, who happens to be transgendered. Eve begins to reevaluate her own sexuality, including exploring pornography and flirting with both her female employee and a young man who went to high school with Eve’s son. Eve isn’t quite sure what she wants, but she is opening herself up to possibilities.

On the flip side, we have Eve’s cocky, jock son, Brendan, who is feeling the uncertainty of college. He quickly learns that what made him popular in high school isn’t working in college. Eve is embracing her change, but Brendan is fighting against the inevitable.

LIKE– Tom Perrotta is one of my favorite contemporary authors. I’ve read all of his previous books and I was absolutely thrilled to be granted an advance copy of Mrs. Fletcher. It’s not an exaggeration to say that this was the 2017 release that I was most anticipating.

I love Perrotta’s complex characters, unexpected plots, and wicked sense of humor. He has a way of making unlikable characters very relatable. Mrs. Fletcher is told primarily in close-third person as it shifts focus between different characters, with the one exception being Brendan. Brendan’s POV is told in first person.

I considered why Perrotta chose this and I think it’s because Brendan is the character that under-goes the biggest transformation. Although Eve arguably experiences great changes, she is a willing participant and none of her changes are out of character. Brendan doesn’t even appear to realize that he needs to change. Early in the story, Eve overhears Brendan having sex with his girlfriend and although she is not shocked by the actions, she is appalled to hear Brendan making crude and misogynistic statements. Even though Eve is upset, she does not confront her son. Brendan is used to living a life where both his male and white privileged allow him to get away with terrible behavior. Until he heads to college, he has never been held accountable, and when finally confronted, Brendan’s world comes crashing down. I think Perrotta allows the reader directly into Brendan’s brain to make him less of a caricature and slightly more sympathetic when he begins to realize that he is in the wrong. Let’s face it, it’s hard to have sympathy for an obnoxious kid skating by on his privilege, but I found Eve’s lack of confronting her son to be just a big of a transgression. She allows Brendan’s behavior because confrontation would have made her uncomfortable. But if you were Eve, would you have said something? It’s this type of complexity that draws me to Perrotta’s stories. Perrotta allows the readers to climb into the character’s shoes and there are never easy solutions.

DISLIKE– Not a single thing. I’m a Perrotta fan-girl!

RECOMMEND– Yes!!! Admittedly, Mrs. Fletcher is not my favorite Perrotta novel, but it was still fabulous. If you’ve not read Perrotta, I’d direct your attention towards Election, if you prefer comedy, and Little Children if you want a drama. I’ve enjoyed all of his novels and short stories. Truly with Perrotta, you can’t go wrong!

Thank You to Grove Atlantic for providing me with an advance copy of Sarah Schmidt’s novel, See What I Have Done, in exchange for an honest review.

PLOT– See What I Have Done is Sarah Schmidt’s historical fiction retelling of the infamous Lizzie Borden case. Schmidt alternates between the narration of Lizzie, Emma Borden (Lizzie’s older sister), Bridget ( a disgruntled Irish housekeeper), and Benjamin ( a stranger hired by Lizzie’s uncle to intimidate and possibly kill Andrew Borden). Although Lizzie was arrested, tried, and eventually acquitted of killing her father and stepmother, was she the one with the best motive? Who was really guilty in this still unsolved case?

LIKE- I love both true crime and historical fiction, so I was eager to read Schmidt’s See What I Have Done. Like most people, I’ve heard of the Lizzie Borden story and I know the gruesome school-yard rhyme about her whacking her parents with an axe, however while reading this novel, I realized that I didn’t know much about Borden or her family history. For example, I always thought this took place on a farm, but although Andrew Borden had an interest in farming, they were not primarily farmers. The Borden family was wealthy and Lizzie had even been sent on a “Grand Tour” to Europe. I suppose the fact that they were a prominent family, made this case all the more shocking.

I liked how Schmidt focused on the sister dynamic between Lizzie and Emma. It’s fraught with tension, jealousy, and even fear. I found it interesting that after such a close relationship, even sharing a house after Lizzie was released from jail, that they became estranged. This twist leads me to believe that Emma felt that her sister likely committed the murder and perhaps felt nervous for her own safety. Schmidt writes Lizzie as someone calculating and unstable. Although other people had motive to murder the Bordens, it seems like Lizzie is the most likely culprit.

Schmidt’s writing style is effortless to read. She is masterful at setting scenes and using rich sensory images. It’s quite gruesome when she gets to the details of the murder, specifically the carnage.

DISLIKE– Schmidt overlaps many of the plot points to show a different view with a switch in character perspective, and although this is often effective, it can also feel repetitive. I wish there had been more on the actual trial and Lizzie’s perspective when she was in jail. These are minor complaints though, because overall, I was captivated by Schmidt’s novel.

RECOMMEND – Yes, especially for true crime and historical fiction fans. If you even have the slightest interest in Lizzie Borden, See What I Have Done is a must read.