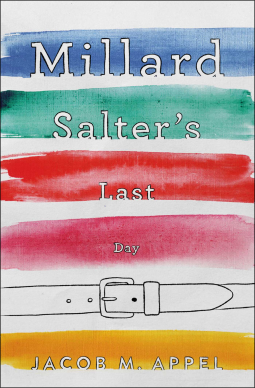 Thank you to Gallery Books for providing me with a copy of Jacob M. Appel’s novel, Millard Salter’s Last Day, in exchange for an honest review.

PLOT- Psychiatrist Millard Salter has decided to kill himself. The love of his life has recently died after an illness and he fears the idea of growing old with the possibility of having a disease or needing assistance. He feels that he has lived enough life and plans to hang himself, while things are still good. With this plan in mind, he spends his last couple of days tying up loose ends. He tries to wrap things up at work and visits with his ex-wife and adult children. He soon learns that leaving might not be as easy as he had anticipated.

LIKE- It took me time to get into the pacing and rhythm of Millard Salter’s Last Day, but as soon as I did (last third of the story,) I felt swept away. Appel has created a complicated protagonist in Salter and I felt the weight of his worries and sorrows. Through his characters, Appel makes a strong argument for the need to have assisted suicide and speaks to the trauma of watching a loved one battle through a terminal disease. Salter helps a loved on with assisted suicide, which is described in detail.

Although Salter is a lauded psychiatrist, his fears and depression create a situation where he justifies ending his life.  I suppose the argument could be made that people should have the freedom to live their lives ( or end their lives) as they see fit, at any stage, but I felt the overriding theme of Millard Salter’s Last Day is that Salter’s life should not end. His judgement is clouded. The worst of it, is none of the other doctor’s at the hospital where he works, even notice that something is wrong. They are too busy trying to get ahead in their careers and dealing with office politics. Salter’s family doesn’t notice either. It’s a sad and unfortunate situation all around, a commentary on how isolated people can feel and how blind we can all be to the suffering of others.

DISLIKE– Millard Salter’s Last Day is pitched as a book similar to Frederik Backman’s novel, A Man Called Ove. They deal with similar themes; like Salter, Ove is hell-bent on killing himself and finds the leaving process to be more difficult than anticipated. However, that’s where the similarities end. Backman’s novel has humor and light to breakup the heavy theme. Ove undergoes a huge transformation, where as Salter stays the same. Salter’s weak story arc, my primary issue with the story.

I had compassion for Salter, but I found him to be a difficult character to stay with for an entire novel. I couldn’t read Millard Salter’s Last Day, without reading several other books at the same time. As such, it took me over a month to read, when it should have taken a day or two. As I mentioned previously, it didn’t grab me until the last third, the first two-thirds were sluggish.

RECOMMEND– Probably not. Millard Salter’s Last Day is heavy. Salter is a solid character, but he  doesn’t have a solid story.