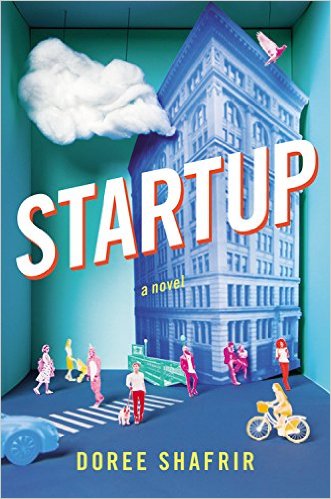 Thank you to Little, Brown and Company for providing me with an advanced copy of Doree Shafrir’s novel, Startup, in exchange for an honest review.

PLOT– TakeOff, a New York based tech company, is poised to be the next big thing. Its founder, Mack, is externally confident and cocky, but he has secrets. Mack is desperate for funding, his company is on the brink of failure, and Isabel, a beautiful employee that he has casually slept with, has a new boyfriend. She is no longer interest in Mack. In a moment of desperation, Mack sends Isabel compromising pictures of himself, an action which creates gossip and jeopardizes his fragile startup.

Downstairs, in the same building as Takeoff, is a newsroom, filled with desperate tech reporters, who depend on social media traffic to keep their jobs. Katya is a young journalist, who inadvertently lands a lead on the problems occurring at Takeoff. Her lead involves, Sabrina, who happens to both work at Takeoff, and who is the wife of Katya’s boss, Dan. Dan and Sabrina are in their mid-thirties, struggling with both their marriage and keeping afloat working in a younger persons industry. Dan is hiding a secret crush that he has on Katya. Sabrina is hiding a massive debt that she has incurred from shopping.

How long can these characters keep up their lies, before the lives implode?

LIKE– Startup is a fun read. I have to admit that it also made me anxious. One of the major themes is the fear of missing out. For example, early in the novel, we see the characters struggling to keep up with their social media accounts, both with regard to adding personal content and staying current with others. This is even more extreme, when you realize that Katya’s job depends on things like Twitter: it’s not just personal, but it’s her career.

We are introduced to both Mack and Katya, as they attend an early morning rave in Manhattan. The rave is designed to get the day started and rather than alcohol, the dancing/music is accompanied by juice drinks. Naturally, the characters have to instagram that they were at the rave, because why even go, if you don’t share what you’ve done? If you don’t document it, it doesn’t matter. Shafrir nails her assessment of  the current state of our society and while my social media behavior is nowhere near as extreme as her characters, I’ve felt that anxiety of keeping up. It’s a hamster wheel.

Also relatable, is the dynamic between Dan/ Sabrina vs their much younger co-workers. Dan and Sabrina are in their late 30’s, yet next to their coworkers, they feel somewhat irrelevant or washed-up. They are the only characters with children, something their coworkers view as an aspiration for the distant future, which truthfully is only ten-fifteen years away. It’s this dynamic that sets a rather desperate tone for both Sabrina and Dan. Dan looks to recapture his youth by going after Katya and Sabrina tries to compensate by buying trendy clothes. Neither of these are the answer of course, but they keep digging themselves into deeper holes. I don’t ever feel that their coworkers are actively trying to make them feel less-than, more that it’s a self-imposed category.

Startup is funny, timely, and a cautionary tale. It has a wonderful women-power, feminist twist. Part of what drew me to her book is Shafrir’s background as journalist and former writer at Buzzfeed. Shafrir’s writing sparkles and she has created memorable characters.

DISLIKE– This is minor, but I wish that the Shafrir had gotten into the heads of the male characters more, given them more depth. By the end of the novel they came across as egotistical, pigs and for a story with so many layers, I felt she could have gone deeper here.

RECOMMEND– Yes. My husband isn’t much of a reader, but for the tech aspect and themes, I was even recommending Startup to him. Shafrir has a strong voice and she has a tight grasp of current topics. With the current technology and associated lingo, I think this novel will date very quickly, but for now, it’s a trendy, on-point read. It will make you think twice about updating your social media accounts. Of course, I’m headed off to tell put out a blast that I read Startup.