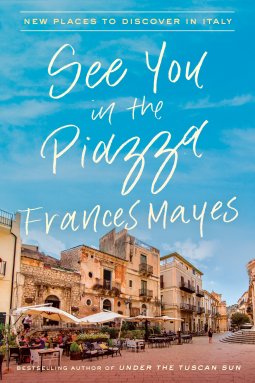 Thank you to Crown Publishing for providing me with a copy of Frances Mayes’ latest book, See You in the Piazza, in exchange for an honest review.

See You in the Piazza, follows renowned travel writer Frances Mayes, as she tours the different regions of Italy. Mayes and her husband are American, but they own a second home in Italy and have fallen in love with the country. Mayes and her husband set off on a series of trips to discover and report on the best restaurants and landmarks in each region. On certain segments of their journey, which spanned over a year, they were joined by friends and other family members. The result is a love letter to Italy.

Mayes has a gift for lush imagery, especially her sensory descriptions of food and wine. Do not read while hungry! Mayes and her husband are definitely foodies and experiencing Italian cuisine is a huge focus of their travels. Although they do not shy away from experiencing local dives, the bulk of their dining is done at amazing five-star restaurants. I love to eat and experience incredible cuisine, but I seriously don’t know how they manage so many intense meals. As someone who has not yet (emphasis on “yet”) visited Italy, I was surprised by the regional differences in food and the variety of ingredients that encompass Italian cuisine. For those who love to cook, Mayes has included many recipes from the restaurants featured in her book.

Admittedly, See You in the Piazza was a slow read for me. I read it in small chunks and it took a few months to complete. it is long and written as a travel diary, which did not captivate my interest. It jumps between Mayes’ masterful writing and the vibe of having a neighbor tell you every tedious aspect of their last vacation. I love travel writing and I know that Mayes’ is respected in her field, but despite her gorgeous descriptions, I not sure that her style speaks to me.

I read an advanced readers copy, but I imagine that the published version will likely include photographs and maps, which would greatly add to the enjoyment of the book.

See You in the Piazza is a great pick for those who adore Italy or who have an upcoming trip in the works. Mayes provides much inspiration for places to visit and experience. It definitely made me wish that I could just jump on a plane and head to Italy! 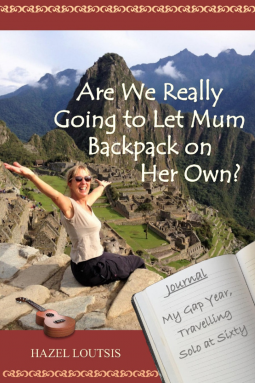 Thank you to Hazel Loutsis, for providing me with a copy of her travel book, Are We Really Going to Let Mum Backpack on Her Own?: My Gap Year Traveling Solo at Sixty, in exchange for an honest review.

PLOT– Hazel Loutsis was a single British woman approaching sixty, when she had a life-altering thought while at the dentist: rather than paying thousands of pounds for a procedure that she didn’t really need, she would spend the money on traveling the world. Loutsis put her affairs in order, bought a good backpack, and flew to India, to begin her year of adventure.

LIKE– Loutsis has an amazing adventurous spirit, embracing all of the experiences that come her way. She picks destinations that are off-the-beaten path, rarely declines trying new things, and truly gets to know the people living in the places that she visits.

I was intrigued by Loutsis style of travel. She keeps it simple, mostly staying in hostels (usually filled with college students) or in accommodations where she volunteers to earn her keep. She is easy-going when it comes to camping, long bus rides, and general discomfort. Honestly, I’m not sure that I could embrace her style of travel, yet I’m envious of the incredible experiences she had during her year abroad. It was certainly a deeper experience than the average traveler. Many times, these experiences seem to come as a reward for her experiencing discomfort, like amazing views after a grueling hike. Loutsis often favored small towns and nature, over big cities- which is also opposite to me. It was engaging to read a travel report from someone so different from myself.

My favorite part was when Loutsis decided to sleep under the stars, while on a tour of the Australian outback. She managed to sleep through Dingos raiding the camp. The Dingos stole sneakers from another woman in the group. Loutsis is told not to worry, since the Dingos don’t usually attack people!

I love travel writing, because it allows me to live vicariously through the author’s journey: Are We Really Going to Let Mum Backpack on Her Own, is no exception. Thanks to Loutsis, I have many destinations to add to my bucket list!

DISLIKE– Are We Really Going to Let Mum Backpack on Her Own, is a straight-up travel journal. It was just like reading a travel diary from a friend and lacked a sense of style that is found in professional travel writing.

RECOMMEND- Maybe. I certainly admire Loutsis and I found much of her book to be enjoyable. That said, I’m not sure that it was unique among the many travel books that are on the market and certainly less polished. 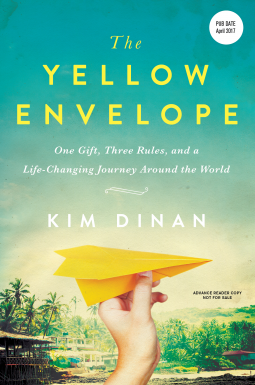 Thank You to Sourcebooks for providing me with an advanced copy of Kim Dinan’s memoir, The Yellow Envelope, in exchange for an honest review.

PLOT – On paper, Kim Dinan’s life looked great. She lived in Portland, Oregon. and had a loving husband, a stable career, and was a homeowner. Essentially, Kim and her husband, Brian, were building a very good life. However, Kim longed for a different type of life. Kim convinced Brian that they needed to travel the world. He agreed to sell their home, car, and possessions to fund their travels, as long as they took a year leave of absence from work, rather than flat out quitting their jobs.

A few days before heading out on their adventure, Kim and Brian are given are surprise by their close friends, Michelle and Glenn. They are presented with a yellow envelope containing a thousand dollars, and instructions to give the money away as they see fit. They are not to stress over it, or over-think these acts of generosity, only to follow their hearts and spread a little kindness during their travels. How will the yellow envelope impact their trip? How will travel shape their lives and change their marriage?

LIKE– The concept of The Yellow Envelope is beautiful. I love the idea of how little random acts of kindness can make a big difference. Late in her memoir, Dinan tells a story about when she was in her early 20’s and working for AmeriCorps, picking up used furniture for minimum wage. She was poor and just scraping by financially, when at one of the jobs, Dinan was tipped ten dollars. The act of kindness, specifically that she was appreciated, is what stuck with Dinan. It’s in this spirit that she hopes, the yellow envelope money was received. The thousand dollars was spread out among many people, organizations, even to help feed starving animals, so none of it was an earth shattering amount given at one time, however, maybe these small acts were enough to affect change. Perhaps the intent and act of spreading kindness is enough? I’d like to think so. I’d like to think that I live in a world where people would feel inspired to commit small acts of kindness, and not feel that they couldn’t give, because it wouldn’t be “enough.”

I like that Dinan didn’t edit out her discomfort. There were many times, especially early in her travels, that she did not give away money, because of her own discomfort. For example, they meet an elderly couple who do not speak English, but who are in desperate need for new shoes. They contemplate giving money or leaving shoes at the couple’s house, even anonymously, but ultimately they cave to their own feelings of this being an awkward situation. Dinan and her husband often worry about how their gift will be perceived, although as they grow more accustomed to travel and foreign situations, this fear lessens. They focus more on their intent and less on how it could be misconstrued.

Dinan speaks about her own issues with accepting kindness. In India, she enters a rickshaw competition with two other women, and they find that their rickshaw, affectionally named “Sunny,” has a lot of mechanical problems. At one point, they ended up needing shelter late at night, in a remote area, and a man takes them in. He gives them shelter and food, even though he is clearly very poor and his sharing is taking away from his family. At another point, a man goes out of his way to get a much needed part for their rickshaw. These are strangers, and although Dinan is unfamiliar with their culture’s customs, she must accept the help. She must accept the idea that generosity between strangers can exist, and that kindness is a cross-cultural concept.

The Yellow Envelope is the right mix of travelogue and personal introspective. Beyond the cultural discomforts involved with travel and the addition of the yellow envelope, Dinan also speaks to her personal problems, including a crisis in her marriage. Through much of her memoir, I wasn’t sure if her marriage would survive the year of travel. Was getting out of their element a good idea? Dinan’s memoir is beautifully written and deeply affecting.

DISLIKE– Nothing. The Yellow Envelope is a fabulous read.

RECOMMEND- Yes! If you have wanderlust, or are feeling like you need to make a dramatic change to your life, The Yellow Envelope is a must read. My heart felt warmer from having this reading experience, which with the current political climate, is a feeling that I think a lot of people could use right now. The Yellow Envelope is a reminder that kindness is still in abundance in the world and that different cultures have different concepts of what should be valued. It’s an eye opening read.